Over the past several months I drew a mini comic for the song "The High Place".

I hand drew it on paper, scanned it into the computer, did the layout in photoshop, printed 20 copies, hand sewed the binding, then did custom drawings onto each cover. I sold about 5, gave 10 away to family an friends, and have 4 left.

It took longer than I'd hoped and was more work than I wanted, but in the end I'm glad I did it.

I have 10 copies of 12 inch vinyl records of "The High Place". It's in stereo (on lathe cut so that's rare), runs at 45 rpm (for higher quality sound), is 7 songs and 24 minutes long. I have white, blank album jackets but I will do custom drawings for each copy.

The epic 100 panel comic I wanted to insert into this album will likely be 50 panels long instead. It just takes too long to do the comics when I have three kids and a full time job to look after. However, I will endeavor to complete it in the coming months and print out with "the high place' comic and prepare it as a vinyl insert.

Here's a link to music video and entire mini-comic for 'The High Place' - https://www.youtube.com/watch?v=x0b-pf_1LhQ
Posted by ghostrain3000 at 6:30 AM No comments:

A Different Kind of Album Experience

In my experience a different kind of album has to start with interesting music, augmented by compelling visuals and live in the form of a fun physical object.

I love the physical manifestation of music in the form of albums, tapes, or creative types of merch. I silk screened all of my 2007 cd packages and discs with silver and transparent white paint on black for a cool collectible package. I also did posters the same way. It all turned out really cool and I sold a bunch more than expected, it even sold in different parts of the world (some still available here).

The 100 panel comic fits into a sweet 40 page book. I put in a section about the process of making the music and the making of the comic. I include concept sketches, outtake panels and inspirational sources. This book comes with the digital music codes for downloading and streaming and some dope stickers. Custom, hand drawn cover. Available 2019 - order now.
Email - ghostrain3000@gmail.com    -     Website - ghostrain3000.com

Handmade to Order.
I released four singles from this album, each one has it's own 24 panel mini-comic. I printed each mini-comic in a coaster sized booklet format with a large panel per page to make the art pop. Each mini-comic is 32 pages and is accompanied by it's song (digital download code), dope stickers. And of course, with unique hand drawn cover. Available 2019 - order now.
Email - ghostrain3000@gmail.com    -     Website - ghostrain3000.com 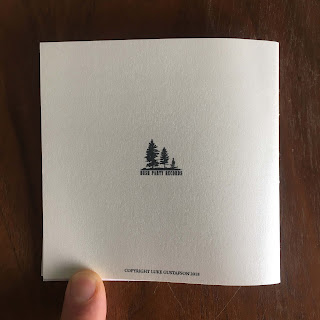 This is the last available vinyl copy of "The Longest Moment is Now" (of the 5 diamond cut, vinyl copies I made in 2017). Each of the 5 copies are covered with unique, custom, hand drawn art. This final copy has the roiling waves, a holy mountain and a bird of prey in a cloudy sky. 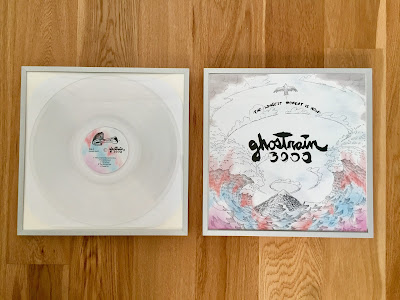 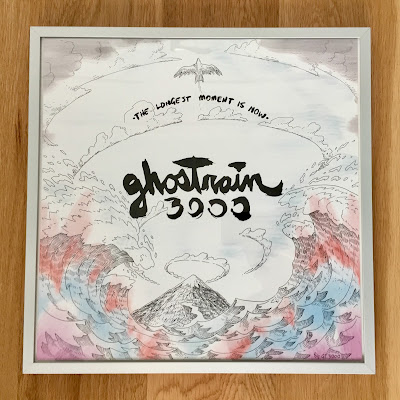 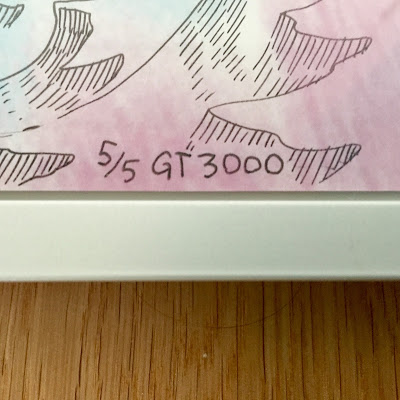 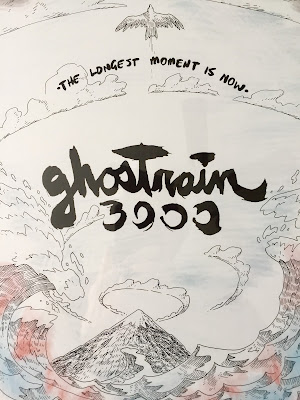 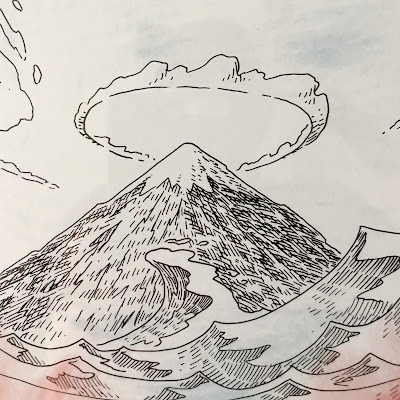 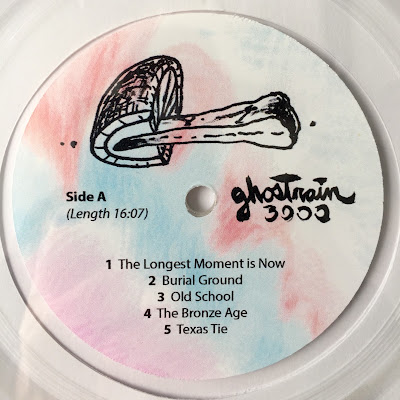 The album cover and record are separately dry mounted so there's no tape or glue used to mount it in the picture frames. So if you would rather it sit on your record shelf it's in perfect condition.

Because the vinyl is diamond cut and not pressed it has a slightly different sound. I would say a warmer tone. If you're serious about picking up this one of a kind album and are interested to hear a recording of this diamond cut record, I will gladly send you that recording.

Thanks very much for your interest. Contact me at: lukeghostrain@gmail.com

Includes unlimited streaming of The Longest Moment is Now via the free Bandcamp app, plus high-quality download in MP3, FLAC and more.

I've been doing a wacky, daily comic on instagram called "The High Place".  It's based on a song I wrote of the same name. 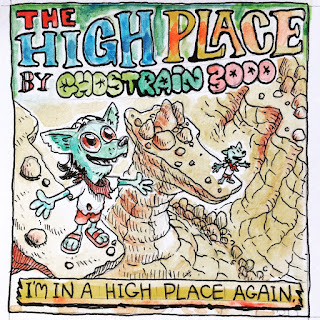 The song is about the highs and lows we all deal with. You can hear the song at ghostrain3000.com
(or click the embed player below). You can stream it for free! Or you can download it for the price of an email (used only to update about my music and comics). Thanks all and happy Friday!

A Vinyl Record Made for Mars


As a small boy I was taught by my dad how to play an album on the record player. First you carefully remove the record from the sleeve, then you  put it on the player, then you put the needle on the edge of the record and then you press the play button. Wait for the warm crackle and then voila music plays out of the speaker.


When 8 track tapes, and then cassette tapes, and then compact discs and then MP3's came out then transportation of music became easier, music in the car was a no brainer, walking around with music was a no brainer. These days there are so many ways to consume music and media it's a constant question how should one consume music? It seems like streaming is leading the way with endless amounts of artists and songs and the entire back catalogue of recorded music available on the internet and through free or low cost streaming services.

I'm personally loving the music streaming. Access to every genre, every artist, the history of every piece of recorded sound. Well, not access to everything exactly, but definitely access to an amount of recordings that would have taken several lifetimes to physically collect.

And yet it seems some people are buying the most bulky, physical form of recorded music still: the vinyl album.

Well, when I was in a record shop asking that exact question I found myself going through the Dire Straights albums they had and found a recording I always wished I had owned "Love Over Gold". I had to have it. I bought it. I needed to own the physical manifestation of the music.


When I really connect with a band or artist's music I feel like I need to have a physical piece of their vision. To hold the music, the creativity in my hands, to feel it, to see it, to smell it.

When you have vinyl records and a record player you can clean off the dust, you can hold the music, you can see the vision of the artist in the cover art, the album notes, the color of the vinyl, the labels on the record, the smell of the packaging.

As I get older and make more music and more songs and use more computers and more digital instruments I wonder how best to share this music? Yes, I release it to the wild internet and the streaming and the downloads and expect nothing in return but a few listens and some thumbs up. Which is totally fine and good, but what about the listener who like me has to have it, to hold in their hands?


I ask myself, how do I want to see my music in physical form when I'm all old and hunched over? "Oh shoot kids if only you could hear a snippet of grandpa's digital music but you can't because I lost the connector to my old hard drive, or my cloud streaming service shut down 20 years ago, but I do have this old record player. Guess I should have pressed some vinyl... "

And that is the exact thinking that has lead me to order a handful of vinyl records of my 2016 album "The Longest Moment is Now". (They will be ready in about 4 weeks. I'll make a post about it.)

Exactly 5 copies have been ordered. They will be 33 minutes: 16 and a half minutes per side. They will be cut using a diamond stylus onto clear, see through vinyl. Each cover will be a unique, intricate hand drawn image using gold and black permanent markers. One copy will never leave my shelf, one copy will go to the president of Bush Party Records, and 3 will be available to the rest of the world.

NASA thought the technique to make records was so robust that they sent solid gold albums to outer space on the backs of the Voyager space craft. Those records reached the edge of our solar system last year and are now travelling interstellar space. Gold records between the stars.

When I go to the planet Mars in 2040 or so, among my sparse possessions, will be a few vinyl records and some of those records will be of my own music.

Imagine this: I'm standing outside of the Martian habitat, in my pressurized martian space suit. I've set up an amplifier, a record player and some speakers. I turn the volume to 8, I place the album on the record player, I carefully brush off the red dust, I place the needle on the spinning disc, the crackle plays through the speakers, the sound struggles to be heard through the thin atmosphere... What song is playing?

I storyboarded a music video for "Burial Ground" and I filmed myself singing it... so I have the important parts to make another music video.
I'm cautious about it at this time because I started with a new client recently (I do storyboards for animation) and I want my work habits to be solid first before I dabble in a side project.
However, I'm starting to feel like the timing is coming for me to be able to start making the video...
You can stream Burial Ground here- http://ghostrain3000.com/track/burial-ground
Posted by ghostrain3000 at 9:00 AM No comments: